How can startups hire the first set of data scientists? In conversation with Bob Friday - VP / CTO at Juniper. 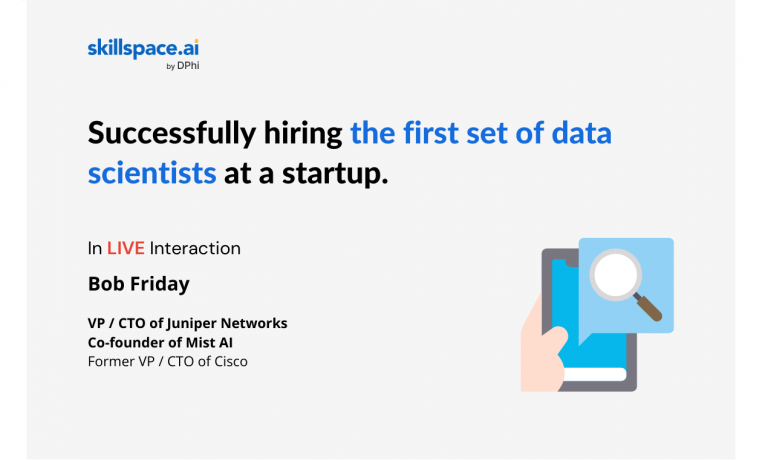 More companies are recognizing that they cannot build and leverage in-house artificial intelligence/machine learning models from the very first month of setting up a data science team. With the increase in the influx of venture capital money, global startup hubs are seeing more data science jobs being posted and increasing demand for AI and data science experts.

It is said that when it comes to building a data science team, many companies fail at the first step — creating a job posting. However, it doesn’t imply that the challenge ends there. It can be confusing to hire the first set of data scientists, and hiring managers feel overwhelmed with a lot of opinionated content for “data science hiring,” while the job description of a data scientist may be different from company to company.

While we wrote a blog on how to hire data scientists at a company, we considered asking our friend and one of the world’s best minds in the field about this.

During one of our recent episodes of Hiring Diaries, we hosted Bob Friday – VP / CTO of Juniper Networks. Besides that, he is a serial technology entrepreneur. Through his work in wireless self-learning networks, his company has achieved a global Gartner Magic Quadrant Leader status in just six years. Bob’s first tech startup went for an IPO, second technology startup got acquired by Cisco for $450 million after which Bob joined the organization as its VP / CTO. And he’s still leading his third startup in the capacity of a Co-founder and CTO of Mist AI – now a Juniper Networks company.

If you look at the industry at this point, hiring data scientists is a significant pain point. Every day, we see 1000s of companies posting data science job openings on LinkedIn. When you look at the number of positions filled, it appears that the picture is very skewed. Plus, seeing from the viewpoint of startups, the problem at their level is different than that of an enterprise. In what ways has the hiring of data scientists changed – from the time you started Mist AI until what it is now?

One, if I’m in a startup, you have to be a data scientist, and you also have to be a sound software engineer. Because what I found in working with data scientists is they don’t have the domain expertise. You’re trying to hire someone who understands very detailed statistics and math and can write software. And that’s usually a scarce combination.

And the big companies kind of get away with hiring Ph.D. data scientists that don’t know how to do production software. They know how they may see the math and the models, but they really can’t write software that you can deploy in production. When you’re in a startup, you have to find people who can do both.

I don’t have the luxury of having pure Ph.D. data scientists who don’t know how to write code. And I would say my first experience was hiring a particle physicist, because they tend to understand all the math if you look at physicists, and I would say, that was kind of the what I looked at hiring between the cracks, you look for people who understand the math, it’s easier to find someone who understands the math and teach them how to write software, than trying to find someone who writes software and teach them the theory of the math. So that’s kind of how I got started in trying to find my first couple of data scientists to help me lay the foundation at Mist.

Okay, that is a recommendation you will give to anyone starting up an AI startup on today’s date? I mean, because it’s something that we come across regularly. They want to hire the first one or two data scientists, and they’re worried about it for a few months. So, yeah, what’s your recommendation on that?

Nowadays, if I’m starting a new company, we’re competing with Google and Facebook. Someone has to choose between wanting to start a startup adventure, these data scientists, they can go to Google, Facebook, Apple, and they can get massive, they can get enormous W-2s (or call it “salaries” if you’re referring to a region outside the United States). Ttrying to convince someone that they should join a startup versus going to Google is kind of hard. Especially if someone’s just out of school.

So usually I look for people who want to learn and I go to a lot of colleges and do similar speeches, like if you’re coming out of school, you want to go down the startup path, or the big company, W-2 path, you know. Usually, I tell people that, hey, if you can, if you can survive in a startup environment, and not everyone can, because usually, startup environments are very chaotic. And if you’re not a self-starter, you have to be able to jump in, do I call it the deep end of the swimming pool and get yourself started, then you will learn more in a startup environment, than in a big company environment. You know, so I typically look for people who are more interested in learning than being in big W-2s.

Okay. But at times, what I have seen is, when somebody is just starting up and it’s a common problem that I’ve seen is that they typically tend to look for someone with some experience in the industry. What’s your take on this? Do you think somebody should go and just start with university grads who are brilliant and are willing to work with you, or are you of the opinion that you should have someone with a lot of experience who can mentor these people?

Experience is good. But I prefer to have a high IQ. So usually, I choose to find someone who understands math. Two, that they know the theory behind all these algorithms to some extent, that knows how to write software. And three, they’re passionate about producing a product because usually, I found when you’re working with data scientists, there are certain data scientists who are more into the research they’re not interested in actually making a product work. They’re more interested in the theory behind something, which is fine.

But when you’re in a startup or a company, right we’re actually in the business of producing products. And so, what I found is usually data scientists, usually, I find PhDs who’ve been researching for a couple of years. And they’re finally tired of writing papers. They’ve been writing papers for three, four, or five years. And they finally decided they only wanted to see if they could build a product. You know, so that tends to be one pattern I’ve seen in hiring data scientists. They’ve done a lot of research, but now they want to try to see that you build a product.

This is an excerpt from a recent episode of Hiring Diaries with Bob Friday, VP / CTO of Juniper Networks and Co-founder of Mist AI – a Garner MQ Leader. Our entire conversation covered several topics, including:

More about Skillspace.ai and Hiring Diaries

The goal of Skillspace.ai is to deliver better experiences for end-to-end technical assessments with scale. In our platform, you can hire tech talent through coding assessments, AI challenges, take-home assignments, 1-on-1 interviews, and much more, all in a highly condensed and simplified manner. The platform is trusted by a range of early-stage startups to Fortune 500s and is built by DPhi.

DPhi is a global community of 100K+ AI enthusiasts from 140+ countries. The initiative aims to democratize data science learning and build an ecosystem to engineer the future of AI. To know more about DPhi, you can visit here. To know more about Skillspace.ai, you can check out this page.

We have created Hiring Diaries to support the engineering and talent acquisition communities that have trusted us so far. The goal is to create a series of live discussions with the top 1% of talent and technology leaders who share our passion for giving first. Hiring Diaries covers various topics regarding scaling technology teams and hiring the best talent. You are welcome to attend any of our upcoming events if you wish to learn more.

The most efficient and reliable technical assessment tool for hiring!

You don't have credit card details available. You will be redirected to update payment method page. Click OK to continue.